Path of Exile‘s 3.13 expansion might have been delayed to dodge the gaming juggernaut that is Cyberpunk 2077, but that doesn’t mean you’ll wont for content. Developer Grinding Gear Games has prepped a few gifts for fans, starting in early December. Three “epic events” are scheduled, offering plenty of presents for all those not on the naughty list. The events begin on December 4, and ends after a month.

Naturally, there are rules to follow, but we all know what you really want: the presents. No need to shake the box or check for loose wrapping; we have the details. The main draw among the prizes is the Demigod’s Authority, a one-handed sword that increases drop rates for rare items and adds +21 to all attributes. However, those are arguably the least interesting aspects. The Demigod’s Authority, when equipped, increases your character’s size by 5%, letting you tower over everyone who got coal in their stocking.

Cosmetic gifts are handed out based on what level you reach during the events. Each Path of Exile December event offers a random draw every 10 levels starting at level 50. Prizes are handed out at 50, 60, 70, 80, 85, 90, and 95. You’ll be given a chance to claim effects for your portal, footprints, weapon, and character. Additionally, at level 85 and beyond, you can win armor sets, wings, and more. 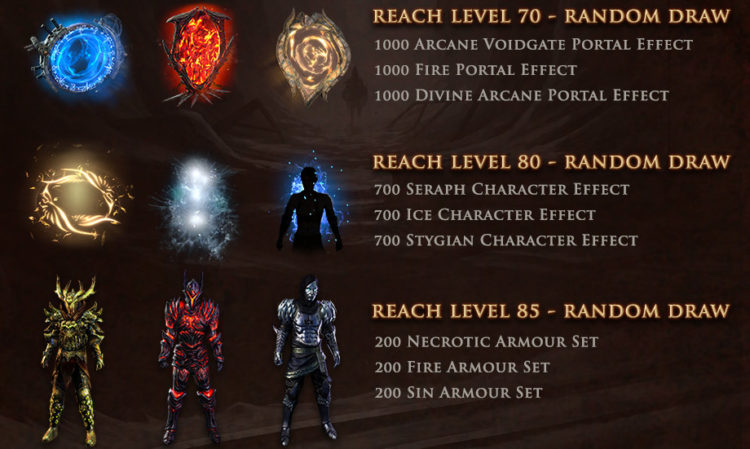 Now, we get to the rules (hurray). You can’t bring your current character into the events. For each one, you’ll need to make a new character to play. Or, you can make multiple, as that will increase your odds of winning. But, man, if you have time to level up multiple characters per event, I am envious of your free time. You won’t be able to claim a Mystery Box with each character, however, as you can only get one per event (and it’s tied to your account). It’s important to note that prizes are offered at the conclusion of the event, so don’t delete your character. There are other rules, but they aren’t strict in any way. You can check them out by heading to the forum post and scrolling down the ‘Events FAQ.’

The Path of Exile holiday celebration begins on December 4. It starts with the week-long Mayhem event, which takes league modifiers and “pushes them to the extreme.” Following on December 11 is the Endless Delve event, which also goes for a week. Finally, the whole shebang gets capped off with a three-week Heist Flashback Event. It’s separate from the Heist league that’s currently underway, but, as such, that means you need to make a new character.

For all the prizes and rules, head to the Path of Exile December events page. Good luck.

Is Bioware Offering a Refund After Cancelling Anthem?

Is Bioware Offering a Refund After Cancelling Anthem?