The Cyberpunk 2077 stream leak is honestly v. boring and not worth watching


Mmm, delicious leaks, with which we may make leak and potato soup. Physical copies of Cyberpunk 2077 have made it to retailers, which means leaks are now inevitable as disgruntled low-wage employees chance their arm and liberate copies from Bezos’s loving grasp. Once such maverick even streamed 20 minutes of it on their PS4. Now, I know that, perversely, the title of this post will just make some of you want to watch it, like a teenager being told they shouldn’t date the 21 year old that hangs around outside the OneStop, but I have watched it, and it is honestly a waste of 20 minutes. If you watch it, you will regret the use of that time.

Not because the game is rubbish, I hasten to add. It might be rubbish, it might be brilliant. I don’t work in an Amazon warehouse so I haven’t played it yet. No: it is just a bad stream that shows very little of the game. Seriously, a laughably small amount. And they talk over all the dialogue.

Here is the sum total of what you actually see in the stream (so, spoilers):

The streamer shows about three minutes of the character creation screen, where the only thing they muck around with is the voice setting so they can get to playing the game ASAP. They choose the Nomad Lifepath (a Nomad version of V is picture up top, there), do a jokey YouTube style intro, and start playing. We open on a seedy garage. V is getting their car fixed by a mechanic, but the mechanic turns out to not be that good and V has to fix the engine themselves.

Having fixed the car, V gets ready to leave, but a local sheriff turns up and is vaguely threatening. Then V drives off into a desert landscape, crashes into a fence by a radio tower, cannot work out how to get out of their car for a while, and climbs the tower to connect to someone called Willie on their walkie talkie. 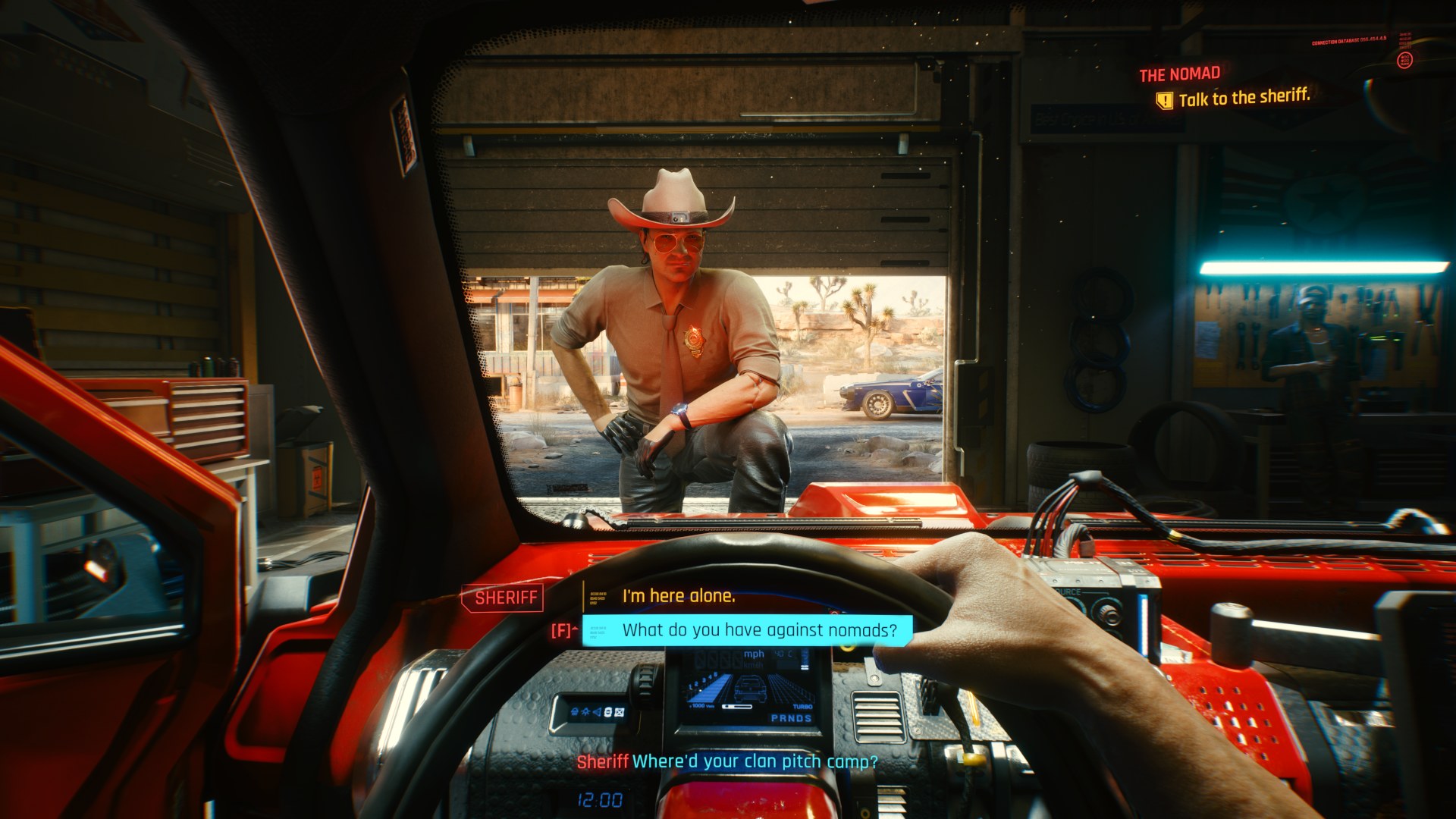 An officially released screen showing the sheriff of cybertown that features in the stream.

It doesn’t really show you anything you might be at all interested in at this stage, assuming you’re not one of those people who are now on spoiler lock down for the foreseeable. Even if you are one of those people, I dunno if you could say this spoils much of anything purely because of the minimal amount of game it actually shows.

It doesn’t go into any of the potentially interesting bits of character creation, we’ve seen more of the Badlands in official videos than in this stream, and you can’t even appreciate the voice acting, because the streamer and their mates seem to have a very specific affliction that means they must speak whenever an NPC is talking. And they do nothing for so much of the stream that waiting for the streamer to do something amounts to more than half of the run time. There’s a legitimate case for “20 minutes of Cyberpunk” being a gross misnomer. If you were selling copies of this stream with that as the title, I could have you under the Trades Descriptions Act.

That would probably be the least of your legal worries at that point, but still.

I guess it does show how the game runs on a PS4, but it doesn’t have any pre- or post-release patches installed, so it’s hard to draw any meaningful conclusions from it. 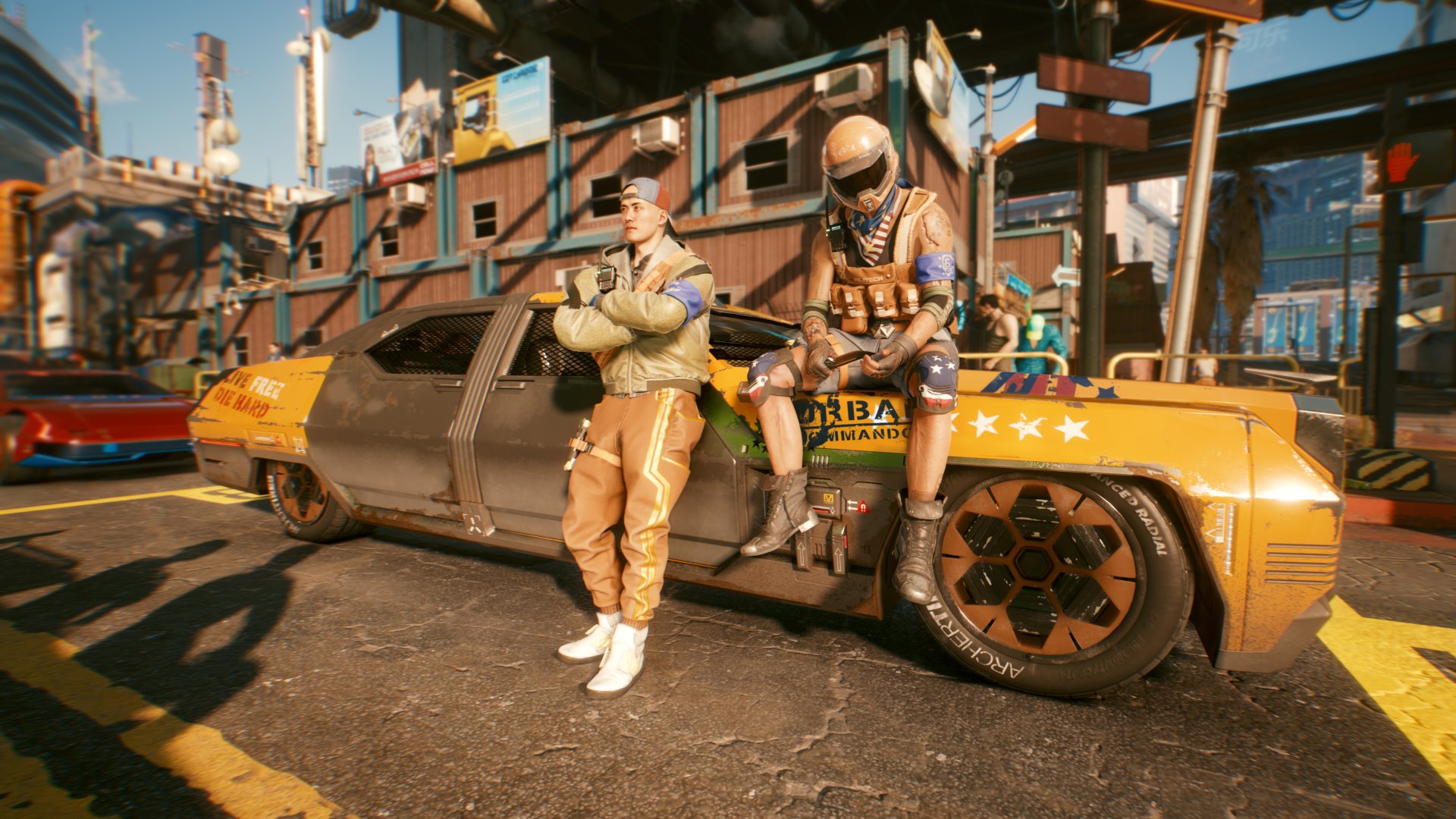 Things you can do in 20 minutes that you will enjoy more than this stream:

Anyway, if you still really want to watch the stream in question, NeoGaf is keeping up with the mirrors as the footage gets taken down. I can’t recommend not watching it enough. Pray for better leaks. Or, failing that, none leaks.

Most Viewed Twitch Stream Ever : Which Games and Streamers has most Views on Twitch

Most Viewed Twitch Stream Ever : Which Games and Streamers has most Views on Twitch

Surprising nobody, Cyberpunk 2077’s next big patch has been delayed

Surprising nobody, Cyberpunk 2077’s next big patch has been delayed