Continuing our look into CD Projekt RED’s Cyberpunk 2077, we’re going to cover stats, customization, weapons, activities and other things you should know before buying. So without further ado, let’s get into it.

When customizing your character, you’ll have five core stats to assign points to. These are Body, Intelligence, Reflexive, Technical and Cool. Body seems indicative of one’s strength and constitution (and possible damage dealt with melee weapons). Intelligence determines your ability to “notice things” and use methods like hacking. Reflexive governs dexterity and more athletic skills. Technical is about hardware and allows for repairing different kinds of technology. Then there’s Cool, which seems akin to Charisma but can also help in sneaking and dealing critical attacks. 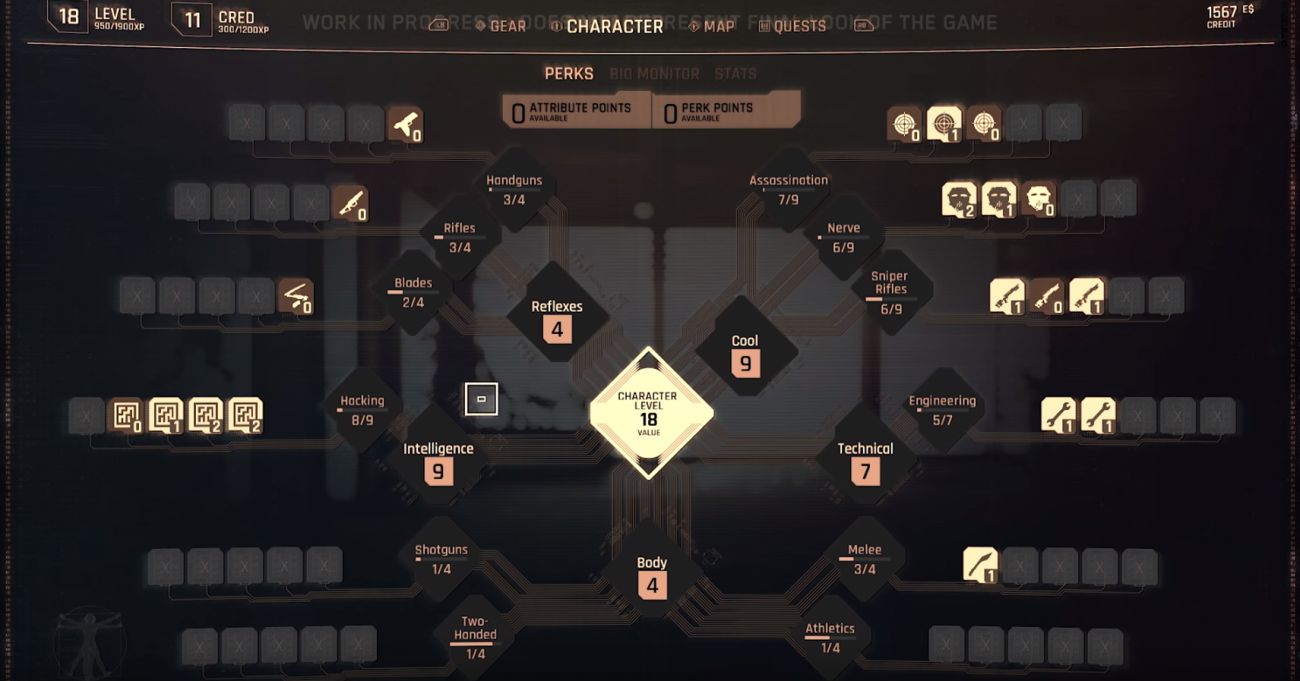 Different stats affect various pathways in the skill tree. For instance, investing in Reflexes will allow for skills associated with Handguns, Rifles and Blades while Cool affects skills associated with Assassination, Nerve and Sniper Rifles. Skills will improve as you use them more but can’t go beyond the total number of points allocated to a specific stat. Leveling up allows for adding more stat points, though whether it’s one or more for every level is still unknown.

The perks are arguably the most interesting aspect of the system. Perk points are provided by leveling up and can provide benefits like reduced damage by 20 percent while blocking, increased max HP, looting scrap from drones and robots, removing weapon mods and much more. Perks fall into different categories like Crafting, Athletic and Engineering, and to access the more advanced versions of certain perks, you’ll need their base versions. Becoming a jack of all trades is easy but there’s plenty of reason to master specific areas.

Certain perks are also conferred by Cyberware, which is it’s own delightful little playground of customization. V has several different areas for equipping Cyberware, from the brain and eyes to the skin, immune system and skeleton. Cyberware has different rarity tiers, which can affect how many slots they require (and each area has a set number of available slots). They can range from the aforementioned Nanowire for attacking enemies and hacking them to bits; Synthlungs for improved endurance regeneration; Mantis Blades that are large blades protruding from V’s forearms; and much more. 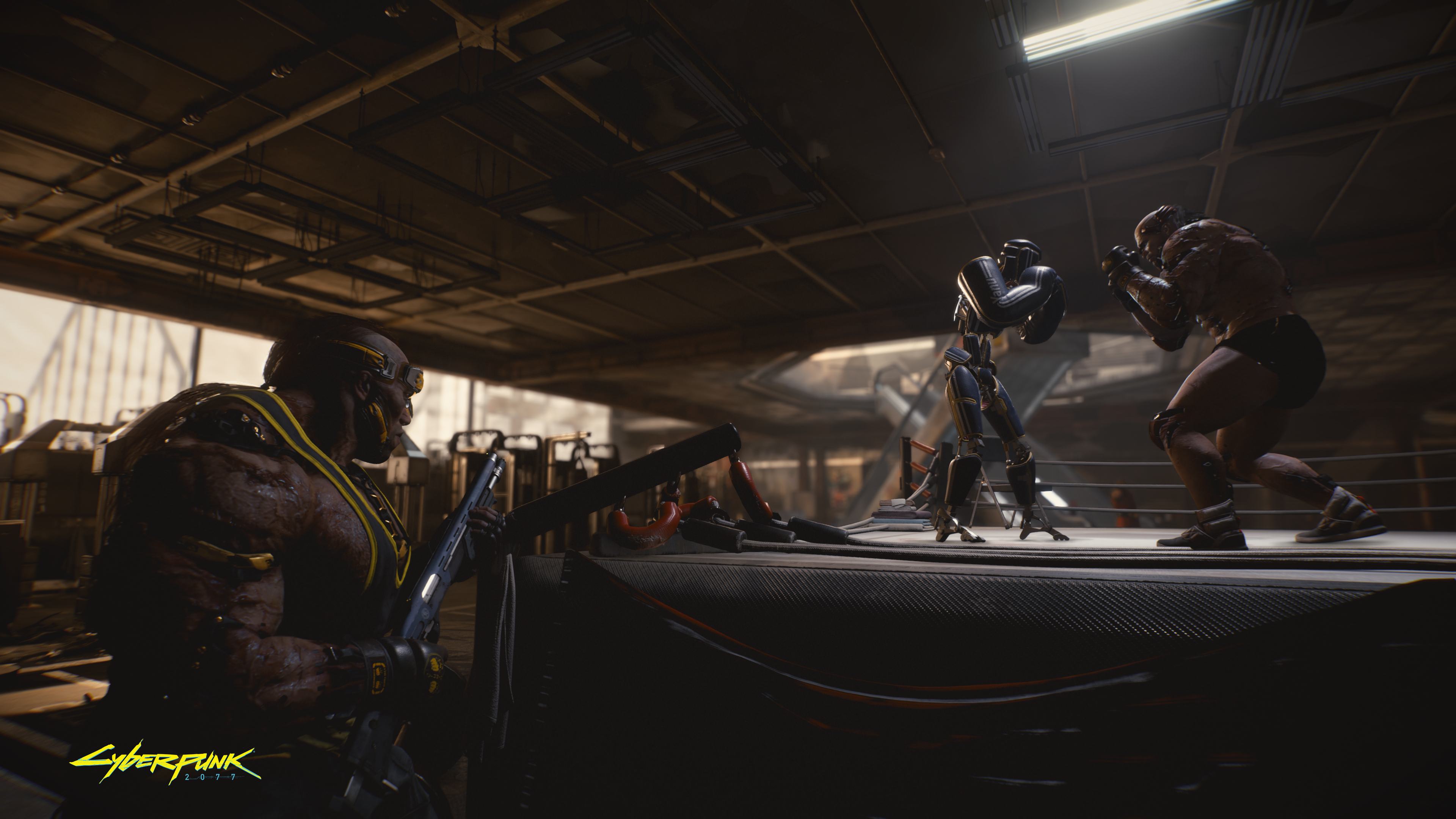 If it’s the hacker life for you, then upgrading your Cyberdeck and installing software called daemons can provide for some interesting combat alternatives. Using these makes it possible to short circuit or overheat an enemy’s cyberware, dealing electrical or thermal damage respectively; glitch a weapon to force an enemy to switch; send out an SOS signal that will lure an enemy away; and even partially blind a target by resetting their optics.

V will be able to adorn all kinds of fashions in Night City but what you wear can also affect gameplay. There are several different slots for armor – shirt, jacket, pants, shoes and two accessory slots (along with slots that could be for headwear) – that can provide resistance to Physical, Thermal, Chemical and Electrical damage (depending on the item, of course). Clothing can also be modded, providing benefits like armor for sneakers, and lets you maintain a certain look without sacrificing functionality. Whether Street Cred gains are reserved for mods or an inherent part of clothing remains to be seen.

Combat in Cyberpunk 2077 can be either melee-based with swords, fisticuffs and nanowire or ranged, which relies on a variety of firearms. Despite the first-person perspective, combat is inherently RPG-based – guns have damage numbers, and it’s possible to inflict different kinds of damage with them. In terms of movement, it’s possible to run, slide, double jump and take cover to evade danger.

Night City is armed to the teeth with sniper rifles, handguns, machine guns, rocket launchers, swords, and so on. Guns fall into three categories – Power, Tech and Smart. Power weapons allow for ricocheting bullets and firing slugs. Tech weapons rely on magnetic technology for firing through any obstacles (like walls). Smart weapons will fire bullets that track, which lets you hit enemies behind cover. Among the melee weapons are thermal katanas which look cool, if nothing else.

Weapons have different variants, so it’s possible to find a smart shotgun that can target several opponents at once with a single shot. Weapons can also be customized, whether it’s changing the scope or attaching a silencer to modifying the damage type and fire rate. They also have different rarities with Legendary being the best. You’ll find these by either exploring the city or killing a specific NPC, but the unique traits they pack may be worth the trouble.

For all the different ways one can murderize folks, it’s possible to complete the entire game without killing anyone. It won’t be easy though. As quest designer Philipp Weber revealed to GameSpot back in September 2019, “The thing is, Night City isn’t a very peaceful place, so you can never play like a full pacifist who is never engaging in any kind of combat because people will attack you sometimes. But you can choose to not kill them. Like in real life, sometimes if there’s attacks, you don’t immediately kill everyone; you can solve situations in different ways.” So even if it’s knocking someone out or talking through a situation, there should technically be a way.

There will be quite a bit of emphasis on destructible environments in-game according to the developer. This ranges from broken glasses to cover that can be destroyed, which can put you or the enemy at a disadvantage. Bullets will also leave decals and there are interesting environmental interactions as well, like shooting a water pipe and water emitting from the exact same place. We’re curious to see how this all plays into combat (like perhaps shooting water pipes over enemies and then short-circuiting their cyberware to increase electrical damage dealt).

Any game with RPG elements is liable to suffer from spongey enemies. These are foes that can take heaps of damage before dying but CD Projekt RED is looking to solve this issue in a number of ways. First up, there are different kinds of foes in Night City. Regular enemies go down quickly if you’re at the same level as them while more elite foes can “deal even more damage” and “take a little bit more punishment” as senior gameplay designer Pawel Kapala described it to VG247. Nevertheless, they’ll still react to your damage, whether it’s feeling pain, stumbling or outright falling. With regards to boss fights, Kapala simply said that, “I think it would be best if players see it for themselves. However, I can assure you that we took the necessary steps not to have them feel like bullet sponges as well.”

The city is brimming with things to do whether it’s Gigs from fixers or Street Stories. You can take Kill Contracts, chase down bounties (who can also be brought in alive) and partake in NCPD Scanner Hustles for investigating different criminal areas. There are races – including what seem to be death races in the Badlands – and underground fights but you may also find alleys and hidden spots that connect to other parts of the city.

Though you can fast travel, one of the key appeals of Night City is just driving around. You can choose from 29 different car models, each with their own variations (like Nomad versions having no windows and IR sensors). You’ll also have different motorcycles to choose from and all vehicles can be summoned to you, courtesy of inbuilt AI. There are also autonomous cars without any drivers and it’s entirely possible to get caught up in a firefight as a passenger. If there are specific vehicles that you like, then they can be stored in V’s garage.

Braindance may be used for more recreational purposes in Night City but it’s a major tool for information-gathering. It’s essentially another person’s experience recorded and played back in the player’s mind. However, due to cybernetics, that person’s emotions, ideals and mental state can also be felt. While it’s an intriguing method for investigation, as seen in the gameplay demo released thus far, it opens up avenues for more nuanced story-telling.

While CD Projekt RED is still working on the game’s overall law system, you can still expect the Night City PD to react to your criminal activities. Shoot someone in a well-to-do area like City Center and the police will respond immediately. More interesting, however, is that doing anything that could annoy the various megacorporations could see them putting a bounty on V, which the NCPD will try to collect. Now the real question is – can other mercenaries also try to collect? 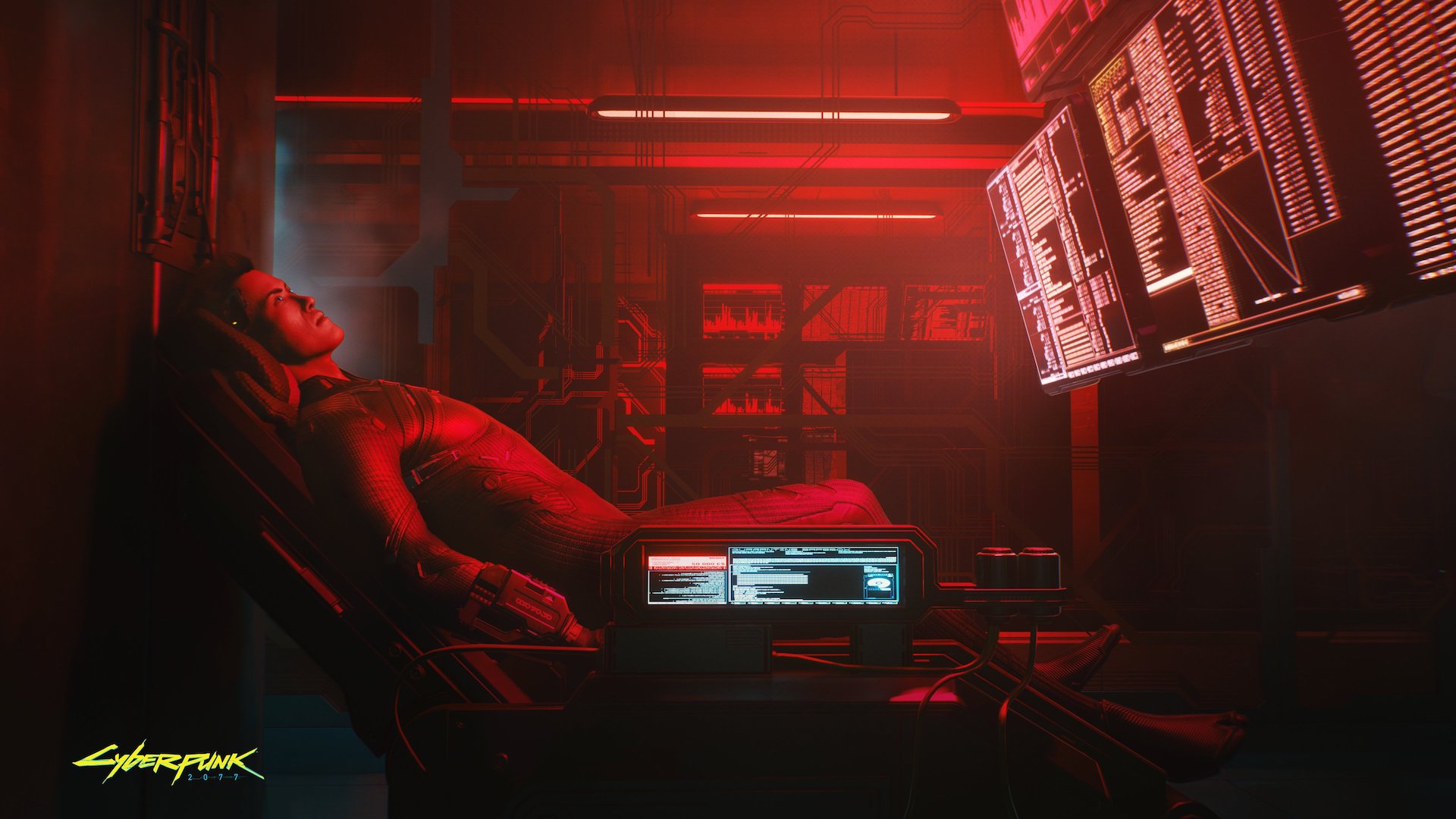 Worried about annoying fetch quests in a massive open world RPG like this? Senior quest designer Philip Weber spoke about the team’s stance on these (which is essentially “We don’t do fetch quests”) and noted the emphasis to be on telling interesting stories. “Sometimes you need to fetch something there, but if there’s more to the story than you probably also do five other things on the way, so the one part where you fetch something doesn’t feel bad.” In short, even if you’re tasked with getting something, it will likely lead to a more involved narrative.

Dr. Disrespect in Cyberpunk 2077? Dr Disrespect sends his Fans into Frenzy with a Confusing Tweet

Dr. Disrespect in Cyberpunk 2077? Dr Disrespect sends his Fans into Frenzy with a Confusing Tweet